Skip to Content
By continuing to use this site, you agree to the use of cookies. Find out more
Home Featuring Escarole + White Bean Soup: Too Easy To Be This Good

Eating vegan, well, and with style can sometimes take a little work. I’m currently studying vegan fine dining and I can attest that it can require time and patience to serve a beautiful and tasty plate. But sometimes you get lucky and create a meal that impresses while still being super easy! I guess you can say my Escarole + White Bean Soup is garlicky, silky, and delicious luck in a bowl.

Too good can sometimes be true

There’s something luxurious about this soup. It tastes and feels way fancier than it is. Its smoky flavor makes you think it’s cooked for hours but it takes less than an hour to make. And like I said, this soup is silky. The escarole gives it this smooth mouth feel that perfectly balances the heartiness of the beans.

Escarole was new to me.

I didn’t grow up eating escarole. When I became an adult, I was introduced to it in salads. I loved the not-as-crisp-as-other-greens texture and crazy jagged leaves. I had it later in soup and I’ve been hooked ever since. Escarole almost gives you the sensation of a flat noodle when cooked in this soup.

There are lots of escarole and white bean soups on the interwebs. My version is different because I take the flavor and amplify it even more. Like I said, I really love escarole so I add a lot more than you usual. The added benefit is the extra nutrition. I also made garlic even more of a star. Last, but never to be least, I include vegan bacon. It’s not required, but using it as a flavoring base and then mixing it in as you finish the recipe adds a chewy, smoky surprise.

This soup is pretty cheap to make too! Give it a try. It’s perfect for a cold, weather soup, but it’s so good I eat it in the summer too. It’s filling while still being light. This might just be the perfect soup.

Let me know if you try the recipe! Tag #debaucheedoesit on IG. I’d love to see your pics of the soup and your satisfied faces! I actually do other easy vegan recipes sometimes too. Follow @daphnedebauchee on Instagram for more. 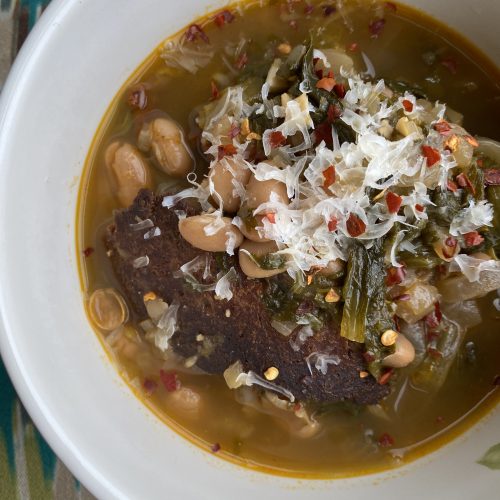 I know every blog you read says this is the best this, that, or the other, but my vegan Escarole + White Bean Soup is for real the best and easiest soup that satisfies in every way. It's too easy to be this good. You'll impress somebody with this one.
Print Recipe Pin Recipe
Prep Time 15 mins
Cook Time 45 mins
Total Time 1 hr
Course Main Course, Soup
Cuisine Italian
Servings 6

All onions aren’t the same. They give you different nuances that when combined, really layer the flavor in any dish. When I’m cooking and especially in this dish, I tend to use a combo of yellow, red, white, shallots, and/or leeks. the onions matter. In this video, I decided to vary the cut of the onion as an experiment.
Keyword easy recipes, italian soup, plantbased, soup, vegan, vegan italian recipes, vegan soup, veganuary
Tried this recipe?Let us know how it was!

This site uses Akismet to reduce spam. Learn how your comment data is processed.

Hey there, you! I sincerely thank you for dropping by my site.  I am a vegan chef who leans toward the fancy. I love researching and adapting foods from around the world. It’s one of the things that make vegan cooking so fun. I’ll also use my little space here on the web to talk style, travel, and occasional randomness. Always know that no matter what, I try to incorporate beauty into every aspect of my life. You too? Cool. We go together now.

Go ‘head. Gimme your email addy. I won’t spam you and sometimes I have prizes!